Today, the Association of Air Pollution Control Agencies (AAPCA) released the 2020 edition of State Air Trends & Successes: The StATS Report. Published annually, The StATS Report catalogues the tremendous progress that has been made improving air quality in the United States and details the core role of state and local air agencies under the federal Clean Air Act.

“Last month, we celebrated the 50th Earth Day and a half-century of environmental progress,” stated AAPCA President Karen Hays, Chief of the Georgia Air Protection Branch. “These achievements are, in large part, due to the hard work of state and local agencies. We are proud of the progress The StATS Report highlights.” 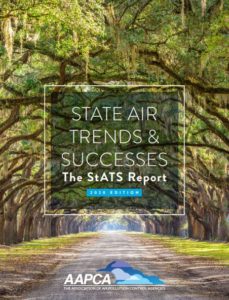 A few national trends that are highlighted in the 2020 edition of The StATS Report include:

Commenting on this year’s release of The StATS Report, AAPCA Vice President Bob Hodanbosi, Chief for the Ohio Division of Air Pollution Control, remarked that, “AAPCA’s growing membership is collectively responsible for protecting air quality for more than 150 million Americans. Even during the current COVID-19 pandemic, air agencies continue to work toward improving air quality in their jurisdictions, including regularly engaging federal partners like U.S. EPA.”

Some key statistics from AAPCA’s 23 state members in the 2020 report:

For 2020, AAPCA is also releasing an interactive webpage that allows the data from select graphs in the report to be explored.

The Association of Air Pollution Control Agencies (AAPCA) is a consensus-driven organization focused on assisting state and local air quality agencies and personnel with implementation and technical issues associated with the federal Clean Air Act. AAPCA members work collaboratively on behalf of states and the communities they protect to act as a conduit for and provide feedback to federal regulators on air quality rules that have significant impacts across the entire nation. AAPCA represents nearly 50 state and local air agencies, and senior officials from 23 state environmental agencies currently sit on AAPCA’s Board of Directors. AAPCA is housed in Lexington, Kentucky as an affiliated association of The Council of State Governments (CSG).